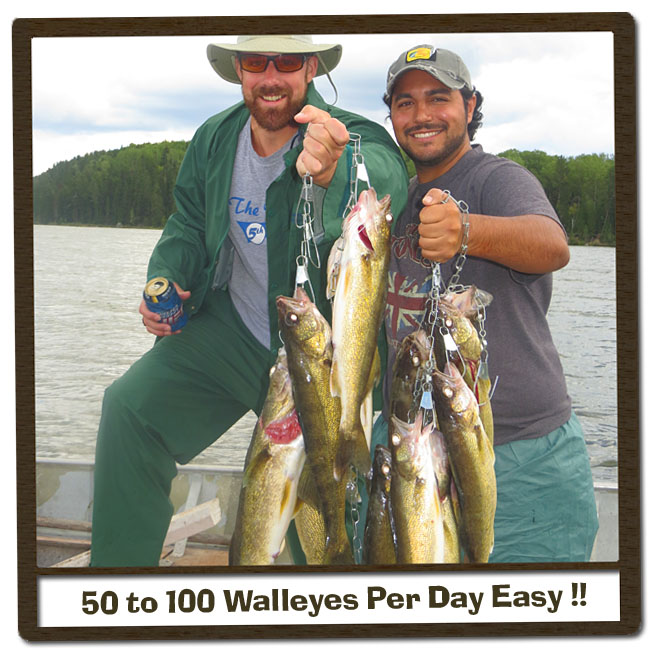 From the satellite photo, Vaughan Lake looks like a remote bay of Lac Seul. Vaughan Lake is connected to Lac Seul via a small channel that's a few miles long and even though Vaughan Lake is considered to be a different lake, the Walleyes don't know this thus Lac Seul makes Vaughan Lake one of the hottest Walleye Lakes in Ontario. There are several reasons for this:

The channel to Vaughan Lake is located in the dead-center of Lac Seul. The English River runs into Lac Seul 75 miles northeast and runs out 75 northwest of the channel. The river is too far away for spawning Walleyes, which are located in the center of the lake. Vaughan Lake is the only safe place in the whole area for Walleyes to spawn. Every spring, countless numbers of Walleye migrate into Vaughan Lake. The really big trophy Walleyes, which are female, travel to Vaughan so they can spawn in peace and not get eaten by Muskie. For every female that migrates to Vaughan Lake, 50 males are following. Muskie are claustrophobic and always stay in areas facing the open lake, so it's rare for a Muskie to venture through the channel and into Vaughan Lake.

Season opens June 15th because Vaughan Lake is a Provincial Fish Sanctuary and the main spawning grounds for Lac Seul. Other lakes in Ontario open the third Saturday in May.

While the Walleyes are spawning, spring water levels start to drop making the channel shallower. The water in the channel warms quicker then the lake thus massive Northern Pike move into the area and literally turn the channel into a gauntlet of teeth. The Walleyes are trapped in Vaughan Lake all summer and cannot get back to Lac Seul until the late fall or early winter when the Pike leave the shallows and go deep. 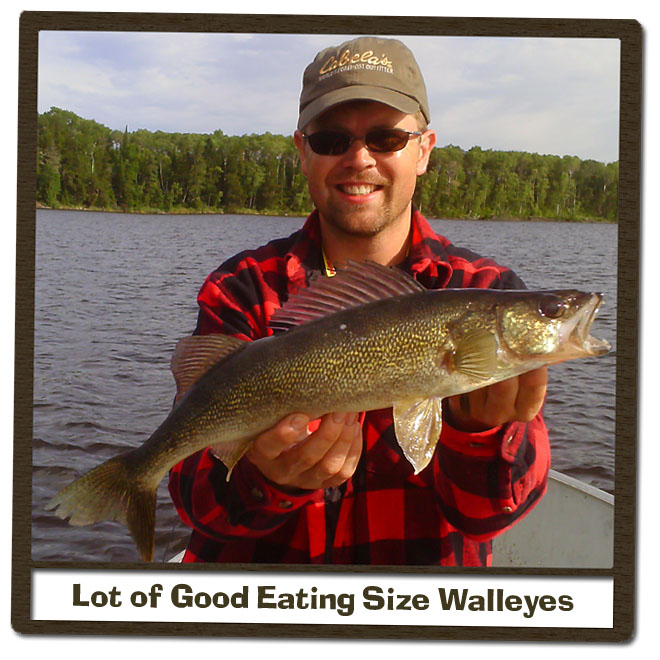 As a result, Walleye fishing in Vaughan Lake is easier then bobbing for apples. Walleyes are very common in the 16 to 23-inch range. In the evening the big females come out of the deep water and patrol the shoreline for minnows. You will catch bigger Walleyes in the 4 to 6-pound range during the day.

You can sacrifice numbers and fish deeper with a worm harness on a 3-way swivel rig and catch the big trophy Walleyes, which can reach over 10 pounds. If you stick to the rocky points and dark-water off the sandy points and sandbars, you can easily catch between 50 and 100 Walleyes per day. Vaughan Lake is an unbelievable Walleye fishing lake.

Walleye after Walleye after Walleye, Lynx Lake is a virtual Walleye machine. It's 4220 acres of prime Walleye habitat and all those Walleyes are exclusively for our guests. The only way to get to the lake is fly-in by float plane and we have the only outpost camp on the lake. As a result, our Lynx Lake guests have their own Walleye factory all to themselves.

Lynx Lake has been closed for a 8 years. We built a new cabin (yurt) on the opposite side of the lake in 2011. The camp will eventually be a drive-in outpost when the road is completed.

There are two streams running into Lynx Lake and one running out. The streams give the Walleyes perfect spawning grounds thus Walleye reproduction in the lake is excellent. The streams also supply the lake with food and a constant injection of clean oxygenated water. There are rocky points and weedy bays as well as sunken weedy plateaus. This lake is small but it's very nutrient and the perfect habitat for Walleyes. Combining these factors with the fact that there is next to zero fishing pressure makes Lynx Lake one of the best Walleye Lakes in the area.

Lynx Lake is one of those 100 Walleyes per day lakes. Walleyes are common in the 16 to 23-inch range. There are bigger walleyes in the 5 to 8-pound range and they are much easier to catch because they cannot hide like they do in big lakes. There should be some Walleyes in the 10-pound range but realistically it's hard for a lake this size to produce Walleyes that big. There have been a few 33+ inch walleyes caught and released, so they should still be there waiting for you. Walleyes in Lynx Lake are the best tasting Walleyes in the world: There is a high mineral and calcium content in the water which makes them gold in color, thus our Walleyes are healthy with strong bones. More important, our Walleyes have pure white meat and cook up fluffy and thick. Nothing is better than sitting on the shore in the middle of the Northwestern Ontario Wilderness and eating fresh Walleye cooked in a big iron pan over a fire.

Please Note: Vaughan Lake is a Provincial Fish Sanctuary from December 31 to June 14 because it's the main spawning grounds for Lac Seul's Walleye.